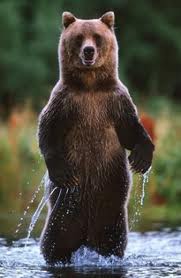 BROWN BEAR
Brown bears (Ursus arctos) are also called “grizzlies” or “grizzly bears.” The term “grizzly” usually is used for brown bears that occur more than 20 miles (32 km)
from the coast. They are the same species, but grizzly bears usually have less access to salmon and high quality food. “Grizzly” refers to the silvery or “grizzled”
highlights in the pelage of some brown bears.

SIZE: Alaska’s brown bears can be very large. Boars can stand over nine feet (3 m) tall and weigh in at 1400 pounds (635 kg). Brown bears may weigh 40 percent
less in the spring after emerging from their winter dormancy, a period during which they do not eat. The average spring weight of a boar brown bear is 500–900 pounds (227–408 kg). The average adult sow brown bear’s weight is about half that of the male’s.

LONGEVITY: Brown bears are reported to live at least 34 years in the wild; however, brown bears are considered to be old in their early to mid-twenties.

REPRODUCTION: Brown bears are usually solitary, except for sows with cubs and during mating season from May to July. Sows are cautious around boars and usually avoid them. Boars cautiously approach sows in the spring, moving in a non-threatening manner. Boars often will be submissive and playful around the sows during this time of the year. The boar attempts to mate with as many sows as possible. The sow may mate with more than one boar. Fertilized eggs will stay in a suspended state until fall, then implant in the uterus if the sow is healthy enough to support herself and the cubs through the winter. This is referred to as “delayed implantation.” After implantation the embryos will begin to develop. The cubs are born in the winter den in January or February when the female is in winter dormancy. She may give birth to one to four cubs, but a litter of two is most common. When born, the cubs are small, less than one pound (<0.5 kg), blind and nearly hairless. They begin suckling right away.

When they emerge from the winter den, cubs weigh about five pounds (2.3 kg) and are covered with a thick coat of fine hair. Brown bears must learn how to locate food, and avoid predators and other dangers, lessons they learn from their mother. They remain with the sow for two summers. In the more northern parts of Alaska, cubs stay with the sow for as long as five years. The sow will not mate until after the cubs have left her. She may produce another litter the following
summer, but where food is scarce, she may not breed again for several years.

SOCIAL STRUCTURE: Brown bears may gather at abundant food sources  such as salmon spawning streams. A hierarchy is established at the site with the dominant animals controlling the best fishing spots. The most dominant animals are large boars followed by sows with older cubs then sows with younger cubs, and then other younger bears. Body language is used to establish and maintain rank, which reduces the number of physical confrontations. Fights do occur, and some bears have large scars from these encounters.

DISTRIBUTION: Brown bears occur throughout Alaska, except on the islands south of Frederick Sound in Southeast Alaska, the islands west of Unimak in the Aleutian Chain, and the islands of the Bering Sea. Kodiak, Montague, Hinchinbrook, Admiralty, Baranof and Chichagof islands all have high densities of brown bears. Admiralty Island, the third largest island in Southeast Alaska’s Alexander Archipelago, has about one brown bear per square mile (2.6 km2). The local Tlingit Indians call this island Kootznoowoo which means “fortress of the bears.”

MOVEMENTS AND MIGRATION: Depending upon the winter and spring conditions and the location, brown bears emerge from their dens from April to June. Boars usually leave their dens first and move to lower elevations in search of food. During spring, bears often feed on sedges, a lush, grass-looking plant growing in wet areas. Sows with older cubs emerge next and move down the mountain, while sows with new cubs emerge last.

Bears learn from their mothers, and from their own later experiences, where and when to find adequate food. This drives their annual wanderings. Bears depend upon the entire landscape for survival. They detect the first emerging plants in the spring, low in the valleys and along coastal shorelines. As spring moves up the hills and mountains, bears move up to eat the more nutritious emerging plants. By late summer many brown bears may again be at higher-elevation meadows feeding on the lush plants just released from winter’s grip.

Brown bears will move to where salmon and other foods are available. This brings them back down the mountain to salmon streams and berry patches. Bears often use the same corridors, or paths, as they move through the forests. These well-used trails have worn footsteps where many generations of bears have passed. These trails sometimes can be worn in solid rock. By late fall most brown bears again are moving back up the mountain, feeding on the ripening berries. The snows begin to build up in the mountains in October. This is when brown bears start locating and preparing their winter dens.

HABITAT: Brown bears usually are associated with open habitat; however, bears are creatures of landscape in that they use a variety of habitats including streams, forested valleys, beaches, meadows, muskegs, tundra and mountains.

PREY: Brown bears are opportunistic and will eat winter-killed animals and sometimes kill and eat moose, caribou and deer. They have been seen eating clams and mussels.

Salmon is on the menu for most Alaskan brown bears in late summer and fall. The eggs, brains and skin of salmon are packed with fats and calories, and it is calories that are needed to get bears through the winter. Bears usually eat the entire fish early in the season, but as salmon spawning season progresses, bears become picky and may eat only the brains and eggs, discarding male salmon completely.

PREDATORY CHARACTERISTICS: Brown bears occasionally prey on ungulates (moose, caribou, deer, etc.). Some brown bears learn to hunt specifically for the youngsters during the spring calving season. Brown bears’ long claws and canine teeth are used to secure and kill their prey. Brown bears use their long claws for digging roots, rodents and other prey from their dens. Brown bears sometimes kill and eat people, although this is rare.

CURRENT STATUS: Brown bear populations are healthy in most areas of Alaska. However, near some communities
and heavily-populated areas (Anchorage, Juneau and on the Kenai Peninsula) brown bear populations nearly have been eliminated or reduced to critical levels because of their negative interaction with people. Bear movements and population densities vary depending on food availability and hunting pressure. In areas of low productivity, such as on Alaska’s North Slope, bear densities are as low as one bear per 300 square miles (777 km2). In areas with easily obtainable food, such as Kodiak and Admiralty islands, densities are as high as one bear per square mile (2.6 km2).

ECOLOGY/CONSERVATION: Brown bears have a very low reproductive rate; interactions with people easily can cause a reduction in brown bear populations. Some bear encounters with humans result in the death of the bear; more encounters certainly correlate to more bear deaths. One of the most common places where people encounter bears is on roads in remote areas. Logging roads are built for the removal of timber, and often are left intact after logging is completed, leaving convenient paths for bears and people alike. A case study of the brown bears on northern Chichagof Island of Southeast Alaska revealed that a large number of bears are killed in the protection of human life and property,
and that the majority of the bear encounters and deaths are on the old logging roads in the area. One of the best ways to protect wildlife, not just bears, is to reduce human access to wilderness areas. The best way to control and reduce human access is to close or eliminate roads into these areas.

Some brown bears become habituated to humans and to their food. These bears may become especially dangerous because they learn to associate people with food, and they lose their fear of humans. Bears are killed in Alaska’s towns and cities every year because they have been allowed to eat human food and, as a result, may become dangerous. Providing food for bears usually results in the bear’s death. Protect bears by eliminating available garbage and other food items from camps and residences.

There are many notable differences between brown and black bears. Black bears have a straight facial profile and no large shoulder hump. Brown bears have a large shoulder hump, muscles used for digging. If you get close enough you may notice that black bears have claws that are sharply curved and seldom over 1 1/2 inches (3.8 cm) in length, while brown bears’ claws are long, as long as 4 inches (10 cm), and they are straighter. Black bears’ claws are retractable like a cat’s, while brown bears’ are not. If you get really close you may note that the black bear’s upper rear molar is never more than 1¼ inch (3.2 cm) long, while an adult brown bear’s upper rear molar is never less than 1¼ inches (3.2 cm) long.

All bears have good senses of sight and hearing. Their sense of smell is excellent. Alert bears can detect, with their eyesight alone, a moving human form from over a mile (1.6 km) away. Once a human is detected, the bear usually moves off to avoid contact. Use this information to avoid dangerous encounters with bears.

If you spend time in bear country you should:
• Look for signs of bears and make plenty of noise.
• Avoid surprising bears at close proximity.
• Avoid crowding bears; respect their “personal space.”
• Avoid attracting bears through improper handling of food or garbage.
• If confronted by a bear, plan ahead, stay calm, identify yourself as a human by yelling (e.g., “Hey, bear! Scram”) and don’t run.

In most cases bears are not a threat, but they do deserve your respect. More information about what to do and how to operate in bear country can be obtained from the Alaska Department of Fish and Game www.wildlife.alaska.gov/aawildlife/harmony.cfm.

Brown bears are rarely used for human food. When asked if he liked eating the meat of a large brown bear he shot, the hunter said, “The meat tastes pretty bad, but you sure get a lot of it!” Bears can harbor the parasite that causes  trichinosis. To prevent infection from this disease wear protective gloves when handling bear meat, and cook the meat thoroughly before eating.

Brown bears have a low reproductive rate. Because of this, bears easily can be over-harvested. Hunters should avoid harvesting females.