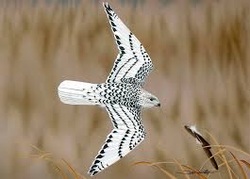 GYRFALCON
The gyrfalcon (pronounced jur’folken) (Falco rusticolus) is the largest falcon in the world. Gyrfalcons are in the Falconiformes, an order that includes falcons, hawks, kites and eagles.

COLOR: There are three color phases of gyrfalcons: light, gray or dark, with the female having heavier gray markings
on her body and head. The lighter-colored gyrfalcons are more common farther north and in Greenland, with the darker forms more common in the sub-Arctic.

SPEED: Gyrfalcons may obtain speeds of 200 miles per hour (322 km/hr) in a dive. However, they rarely dive on their prey, preferring to use level powered flight. These speeds often exceed 50 miles per hour (80 km/hr).

LONGEVITY: Gyrfalcons can live 25 years in captivity and 12–15 years in the wild.

REPRODUCTION: Males begin defending nesting territories as early as January, and the females arrive in early March. The nest is often a rocky shelf on a cliff that was used by ravens or golden eagles in previous years. Successful nest sites are used repeatedly and can be identified by the streaks of white guano. After pair-bonding displays and copulation, two to seven eggs (usually four) are laid. The eggs are incubated as soon as the first one is laid, to prevent freezing. Incubation lasts 35 days and hatch within one to two days of each other. The chicks are covered in a heavy
down. After only ten days the chicks are able to thermoregulate (maintain their body temperature), allowing the female to join the male in hunting forays. At seven to eight weeks the chicks are able to fly, but they depend upon their parents for food for another month until mid-September.

SOCIAL STRUCTURE: Gyrfalcons are solitary except during the breeding season when the pair and their young are together until mid-September. They mate for life.

DISTRIBUTION: Gyrfalcons are holarctic in distribution and rarely are seen south of 60 degrees latitude.

MOVEMENTS AND MIGRATION: Gyrfalcons are considered non-migratory. However, some birds will disperse
south during the winter, sometimes reaching the northern United States.

HABITAT: Gyrfalcons nest in remote regions of the Arctic, and they prefer to use the open tundra.

PREY: Gyrfalcons feed primarily on ptarmigan, but have a large range of prey including geese, ducks, seabirds, ground squirrels, arctic hare and lemmings. Pigeons may be taken in towns during the winter.

PREDATORS: Their large size and high-performance flight make the adult gyrfalcon nearly impervious to natural predators. Gyrfalcons can be aggressive when defending their young. They will attack and drive away golden eagles, great horned owls, foxes, wolves, wolverines and grizzly bears all of which may take the young. Gyrfalcons are not very aggressive to humans, even to researchers who access their nests to collect data. The birds sometimes will fly nearby, calling, but will refrain from striking human intruders.

Some Inuit people use the feathers of gyrfalcons for ceremonial purposes. People take gyrfalcons as chicks (called eyases) to be used in the sport of falconry.

PREDATORY CHARACTERISTICS: Gyrfalcons usually wait at a lookout for their prey to appear. Gyrfalcons’ keen eyesight gives them an advantage over their prey. Their response to prey is swift. They use the natural features of the terrain for cover and surprise. Unlike the peregrine falcon that uses gravity and speed to strike and kill its prey, gyrfalcons use raw power to chase down the prey and subdue it with powerful feet, or they crush its neck with their large powerful beak. They take prey in the air and on the ground. When large prey is taken, such as an arctic hare, it can be
cached and fed on later. During the winter some gyrfalcons move far enough south to come in contact with human civilization. When in towns and cities they may feed on pigeons; in farming districts they prefer to hunt the open fields and farmland and along the waterfowl flyways.

ECOLOGY/CONSERVATION: Human activities have had little affect on gyrfalcons — so far. However, the northern ecosystem increasingly is becoming contaminated with chlorinated hydrocarbons such as DDT. These contaminates have found their way into the Arctic marine ecosystem and are concentrated at the top of the marine food web. Some fish-eating marine birds included in the diet of some gyrfalcons may pass their contaminants on to the falcons. Migrant prey species may bring contamination up from the south.

An effective way of tracking the health of Arctic habitat is to monitor the top predators. Gyrfalcons are one of the species that should be considered for such research and monitoring programs. By monitoring gyrfalcons we may be able to determine if the Arctic ecosystem deviates from a pristine and healthy condition.

Arctic ecotourism is growing in popularity, and seeing a gyrfalcon can be a high priority for tourists. Good areas to view these large falcons include overwintering areas with adequate food resources. For those who want a grander adventure, they can arrange to travel to the gyrfalcons’ breeding grounds in the Arctic. It is an extraordinary experience to watch this large falcon hunting on the Arctic plain. Ecotourism can have negative effects, so we must monitor this industry as it grows in the Arctic.