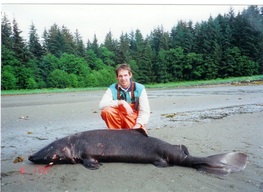 The Pacific sleeper shark (Somniosus pacificus) is a secretive, deep-dwelling shark referred to by many fishermen as the “mud shark.” The Greenland shark is found in the North Atlantic Ocean and is a similar species.

SIZE: Pacific sleeper sharks have been caught that exceed 20 feet (6 m) in length, which would weigh in at about 8000 pounds (3600 kg). This is approaching the size of adult orcas.

COLOR: Pacific sleeper sharks are uniformly dark gray to black with round fins and tail. Their eyes are small and black.

LONGEVITY: Pacific sleeper sharks probably live more than 40 years. This age estimate is based upon the size this species obtains and upon the average growth rates. Determining the age of sharks is problematic. Bony fish can be aged by counting the annual rings on a bone in the ear called an otolith; most sharks do not have any bones and no shark has an otolith.

SOCIAL STRUCTURE: Deep underwater video has captured many Pacific sleeper sharks feeding together on whale carcasses. The sharks appear to be non-aggressive towards each other as they feed. No information is available on other sleeper shark social interactions.

DISTRIBUTION: Pacific sleeper sharks are found in polar and sub-polar waters throughout the year. They occur in the Pacific Ocean from Baja California north to the Bering Sea, Chukchi Sea, Beaufort Sea, and to the Okhotsk Sea off of Japan. They inhabit cold, deep waters to depths exceeding 6500 feet (1981 m). At higher latitudes sleeper sharks use shallow as well as deep waters.

MOVEMENTS AND MIGRATION: Satellite tags have been attached to Pacific sleeper sharks to determine their movements. Tag data indicates that individual sharks moved from the bottom, 2000 feet (610 m) deep, to the surface each night, apparently to feed. The limited tag data indicate that they did not migrate to other areas.

HABITAT: Pacific sleeper sharks use the ocean bottom for resting and to feed on fish and large, sunken prey such as
dead whales. At night they come to the surface to feed.

PREY: Pacific sleeper sharks have a huge gut capacity and can fill it with copious amounts of food. Of 33 sleeper sharks sampled on an International Pacific Halibut Commission survey, five of the sharks had empty stomachs and 28 contained prey including salmon, squid, cod, pollock, squid and octopus beaks, harbor seal and other marine mammal tissue. One shark had nine adult pre-spawning chum salmon in its stomach. Sleeper sharks have been documented feeding on orca-killed whales, gorging themselves on blubber and flesh.

PREDATORY CHARACTERISTICS: Pacific sleeper sharks are designed for stealth. Their eyesight is probably poor, but good eyesight is not necessary since they have an exceptional “sixth sense" to detect very slight electromagnetic fields. Muscle activity, even the beating of an animal’s heart or the movement of its diaphragm, emits an electrical signal that the sharks use to detect, locate and attack their victims. Under cover of darkness prey would be less likely to detect a
sleeper shark coming up from the depths. Prey emits electromagnetic signals that guide the shark right in. For sleeper sharks, darkness is not a deterrent to detecting prey, but instead a cover or camouflage.

Pacific sleeper shark teeth are quite different in the lower jaw compared to the upper jaw. The upper jaw has small, sharp, conical teeth much like those in halibut. These are used to seize and hold prey. The teeth in the lower jaw are interlocking, forming a serrated blade used for slicing. Sleeper shark bite marks resemble large three-quarter moons or slices. Sleeper sharks attack suddenly and without warning. A harbor seal might be floating on the surface of the ocean trying to catch its breath when it is attacked from below by a 400-pound (181-kg) sleeper shark. A bite to its midsection and the seal is eviscerated and struggling for its life. At minimum, the shark gets a large chunk of skin and blubber, likely enough to cause the seal soon to die. However the shark will finish the job by ripping the seal to bits, eating and digesting the entire animal. Smaller animals such as adult chum salmon or black cod usually are eaten whole.

CURRENT STATUS: Pacific sleeper shark numbers increased dramatically in the North Pacific during the 1980s and 1990s. In areas where few sharks ever were caught before, now fishermen are catching many more sleeper sharks. Many fishermen are reporting more and larger sharks each year in the Gulf of Alaska.

ECOLOGY/CONSERVATION: During the 1970s, temperatures in the North Pacific Ocean increased, followed by a change in species composition in the region. The ecosystem supported great quantities of shrimp and crab before the 1970s, but these species nearly disappeared and were replaced by pollock, cod, halibut and arrowtooth flounder. This species composition change is referred to as a “regime shift.” Other noteworthy and dramatic changes included decreases in sea lions, seals and forage fish (capelin, sandlance and herring) and increases in salmon sharks and Pacific sleeper sharks.

One theory explaining the regime shift involves increased winds, global warming, the Gobi Desert, iron and a group of phytoplankton (small single-celled plants) called “diatoms.” As the Earth warms due to global warming, scientists predicted, and have seen, stronger and more persistent winds. When these winds are especially strong they can sweep across the Gobi Desert of Mongolia carrying tons of dust laden with the element iron. Much of this iron is deposited in the North Pacific Ocean, which promotes the growth of a class of organisms called diatoms. Diatoms are single celled plants and can grow rapidly if the conditions are right. The diatoms use iron in a process that keeps them near the water’s surface and in the euphotic zone where they capture the sun’s energy. When the iron supply is used up, the diatoms sink to the bottom of the ocean. If there is lots of iron and it comes in a steady supply, the diatom population blooms and diatoms stay near the surface of the ocean and promote the surface food web and ecosystem.
But if the winds are sporadic the diatoms grow, but soon deplete the iron in the water and sink to the bottom. This may be better for the ocean floor food web and ecosystem. The regime shift of the late 1970s may have been a result of the processes described here. As global warming changes wind patterns and the strength of the wind, we can expect more regime shifts and ones of greater magnitude.

Another theory of reduced marine mammal populations is that great white sharks have become abundant in Alaskan waters. Sharks are secretive by nature and do not readily reveal their presence, making it difficult for scientists to study.
Sleeper shark populations are at record highs in the North Pacific, and they are preying on many species of fish and on some marine mammals. Sharks may be exerting an influence on the North Pacific marine ecosystem that will be long-lasting. Some scientists and many fishermen are concerned about what will happen, now that sharks are so common in the North Pacific Ocean. Many people have proposed shark predator-control programs without understanding
the consequences.

Mathematical ecosystem models predict that there may be worse consequences if people reduce the shark population than there will be if they do not. Though sharks compete for some of the fish people catch and eat, sharks also reduce large changes in prey population numbers. According to some population models, removing sharks likely will result in increased salmon, black cod and pollock numbers. The increase in these smaller predatory fish would increase predation on smaller but extremely important forage fish such as herring, capelin and sandlance. The predicted outcome of the subsequent declines of the forage fish is for further reductions of seal and sea lion populations. This
would be bad for fishermen. It also would be a big concern for those people trying to bring the sea lion back from the brink of extinction.

A wide variety of prey are taken by sleeper sharks including marine mammals. Marine mammals, salmon and squid; some of the prey shown in the image to the left were removed from sleeper sharks caught on an International Pacific Halibut Commission survey. The seal and sea lion appear to have escaped a sleeper shark or great white shark attack.

A legendary large fish has been described in Lake Iliamna, Alaska's largest lake at 2,622 km squared (1,012 sq miles) and over 300 meters (1,000 feet) deep. The lake has the world's largest red salmon run of over 1,000,000 fish and contains other fish and harbor seals, all of which are sleeper shark prey. Bruce Wright has hypothesized that sleeper sharks may also be using the lake and they fit the description of the Lake Iliamna monster. September 10-13, 2013 I will make my first expedition to the Lake Iliamna to determine the best study methods for collecting data on the 'monster.'